It was one of the greatest honors in my life to study astrology with Samuel H. Weir. The great man transformed my entire way of thinking about myself and my life, and it even led me to astrological pilgrimages beyond the shores of my native UK for the first time ever. Here the young yours truly (far left) is in Berkeley, California, sharing a joke with the legendary Stephen Arroyo at one of his amazing, astrologically-inspired conferences there. Beside us are other such astrological luminaries as Gavin Curruthers and the late Dennis Elwell . 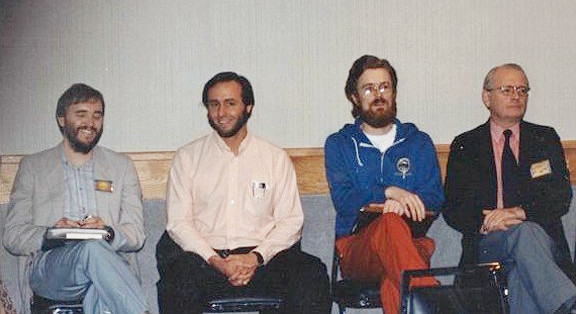 Having seen the huge transformation in my mother's health and wellbeing as a result of being diagnosed and treated by 'Mr. Weir' (as I always felt obliged to call him, out of respect) - and seeing her actually go out for the first time in 20 years and get a job at the age of 56 - there was no doubt in my mind that there was some kind of special knowledge or wisdom going on there.

When my mother first went to seen him, in a terrible, terrible state, and started to tell him what was wrong with her, he immediately stopped her and asked for the time, date and place of birth instead. This confused her and made her wonder if she was seeing the right person after all!

However, having scribbled a few notes on the back of an envelope, he proceeded to share her entire health history with her, from teenage to the current time, not missing a single beat ~ even accurately stating the times of disease afflictions almost to the hour! She rapidly realized that this man new more about her health than she did herself! (He even reminded her of sickness events that she had long forgotten!)

He then went on to conclude with a precise description of the condition she was there to present to him! He explained the treatment that she had to adhere to, then - to the letter - he indicated a date when she would actually be able to return to a full diet in moderation. (She could barely eat a spoon of mashed potato when she first visited and looked like a walking skeleton as this had been going on for a long, long time with no relief from orthodox medicine.)

Naturally, when I witnessed my mother, 18 months later, as Samuel H. Weir had predicted, 30lbs heavier and eating a full range of food for the first time in many years, I really had to know what it was he did and how he did it. When asked, he readily explained that he'd diagnosed my mother's condition with 'astrology' and directed his treatment under its guidance too.

In awe of this, I asked him if he would teach me how to do it. He looked at me long and hard and asked exactly why I wanted to learn how to do astrology? I said, because it could clearly be used to help people lead a better life for themselves (including myself - I was chronically nervous myself at the time, without knowing why) and for that reason I wanted to understand it. He smiled and said that this was a good answer, so he would teach me. (He would not have taught me if I wanted to learn it for stroking my own ego or for exerting control over others ~ adding that the karma generated for misusing this kind of profound inner knowledge was far, far greater than making mistakes in ignorance!)

Suffice it to say, this began an eye-opening journey of life transforming discovery that has lasted long, long after Mr. Weir and his dear wife Molly passed away. I never sought to be an astrologer in all this time. However, I do value astrology in helping me understand what is going on in our lives at significant moments and turning points, which are usually unexplainable. I like to think that I have helped others understand themselves and their life journeys better along the way and, in fact, I am doing more of that kind of thing recently than at any stage in my life.

Hopefully, by archiving the 1,000+ hand-written reference cards that Mr. Weir created throughout his life, I am both celebrating the great work he once did on this earth, as well as helping serious students to understand themselves as well as help others. I therefore hope that anyone studying and using this material will do so with the utmost integrity - to positively assist others in finding their way towards light, broader understanding, and self-discovery.

I once drew this illustration for Mr. Weir,

to thank him for all he had done for my mother,

my self and my family at that time.